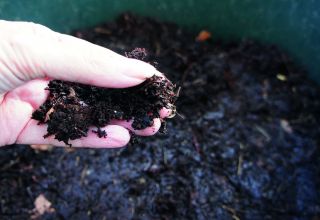 The good news is there is only one way to get leaf mould – make it yourself. Leaf mould is not produced or sold commercially.

The thing with leaves is don’t think of them as a nuisance involving hard work.

Think of them as a source of composting ‘gold’, a wonderful soil improver you should all embrace

Leaf litter is the source of free and wonderful organic matter and should be used to replenish the garden.

And you only need three ingredients – fallen leaves, moisture and time!

Leaf mould is what’s left when the dead, fallen leaves from deciduous trees and shrubs are heaped up and allowed to rot down. As they slowly moulder, only the toughest bits remain, eventually forming spongy, dark brown crumbs to rival any dessert topping.

Leaf mould should be free of pests, diseases and weeds (unless you gather it from where they’re seeding), a delight to handle, and you can’t possibly overdose your soil on it. The hidden alchemy that brings it about – the countless microorganisms that drive decay – gives leaf mould its almost magical quality.

It has several great attributes. The first is that it can hold up to 500 per cent of its own weight in water.

Most leaves are slightly acidic when they fall, with a pH below 6. However, as the leaves break down into leaf mould, the pH goes up into more of a neutral range. Leaf mould will not correct pH problems but will have a moderating effect.

Though leaves are not high in nitrogen, phosphorus and potassium, tree roots mine calcium, magnesium and many other trace minerals from the soil and so your garden will also benefit from these nutrients.

As part of reducing your reliance on manure and other imported fertility, leaf mould should become pivotal to gardening. There are several ways to store the fallen leaves.

One is to build circular wire cages – about two metres in diameter. The number of bins clearly depends on the number of trees and leaves you have in your garden.

A porous builder bag filled with autumn leaves and with its handles lashed together also works well. Remember, you get out only a quarter to a third of what goes into a cage. You can also just full black bin bags but remember to pierce the bag to allow air in to accelerate the decomposition.

Perfect for your pots

You can also use leaf mould as a potting mix. Sieve it to get rid of any big lumps and then mix it according to different recipes.

A basic mix for seed sowing and for potting-up plug plants, bulbs and tomatoes, should be a 50:50 mix of three-year-old leaf mould and worm-worked garden compost, both passed through a quarter-inch (6mm) sieve and thoroughly blended. The garden compost provides ample food for about a month before you need to start feeding.

For small seeds, you can pass this already refined mix through a finer eighth-inch (4mm) sieve to give a seed covering that is akin to breadcrumbs.

Leaf mould is brilliant for the top-dressing of lawns. It’s low in nutrients so won’t encourage over-quick growth, and if you mix it with sand, it’s easy to rake in after aerating your lawn.

Soil improver of the highest quality

The finished article after perhaps three years is chunky mulch that is ideal for smothering young annual weeds and blocking out light to stop others coming up.

Nothing beats fresh leaf mould as a dark foil for showing off emerging perennials in a border filled with promise, and it works just as effectively around newly planted vegetables, fruit, or on top of containers to help prevent them from drying out.

If you’re impatient and have only leaf mould that is one or two years old and hasn’t yet formed ‘crumble, you can use it as mulch.

Using a sieve results in a more refined mould, free of even small twigs.

In spring, spread a bucketful of leaf mould to each square yard and fork it in deep. It helps bind loose, sandy soils and improves their water-holding ability. Conversely, it helps break up tough, claggy clays, making them more gardener friendly.

If you have a lot of ground to improve and sieving is impractical, take your leaf mould out as it comes, remove hard chunks of debris, and fork or dig it in.

Leaf mould is low on fast-acting plant nutrients; its effect is more of a catalysing one that encourages a healthy soil ecosystem in which everything works together to feed plants gradually and slowly. Soils bolstered with leaf mould become slowly darker in colour as their humus levels increase.