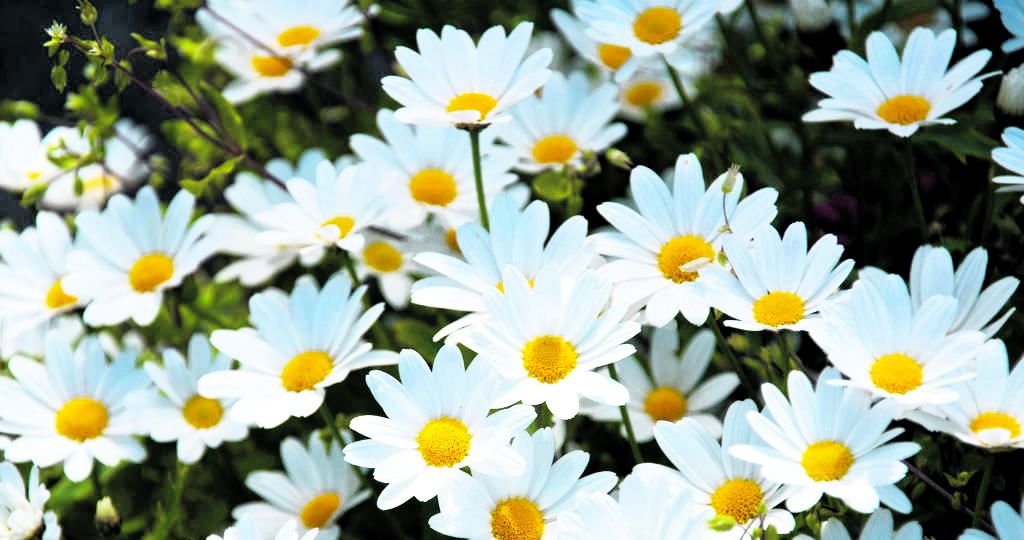 A common sight in almost all our gardens, the daisy in its many forms and colours Is a delightful sign that spring has arrived and summer is on its way.

Ask any four-year-old to draw a flower, and chances are you’ll get a daisy. The daisy has an innocence and simplicity that makes it an immediate favourite of young and old. Its round yellow centre smiles at us like the sun, giving the flower its name—daisy, or ‘day’s eye.’

Daisies definitely lack snob appeal, but their unpretentious shape and undemanding nature give them a secure place on many gardeners’ lists of favourite flowers.

In the garden, perennial daisies can carry a bed all by themselves. Their first flush of bloom bridges the gap between tulips and irises, and they keep going strong all season. A single plant of vivid painted daisies or a clump of icy white Shastas can make the colour of neighbouring plants come alive. And whenever a room needs brightening daisies are a natural choice-they make great cut flowers, lasting for a week or more.

Most daisies are ridiculously easy to grow. Quickly prepare a patch of earth, sprinkle out a packet of seeds, and presto! Nearly all of them flourish in ordinary garden soil,

The daisies described here are perennials, but that doesn’t mean they live forever. Most are at their best for only a few years. Division will reinvigorate a planting, but you really don’t need to bother as daisies replant themselves by self-sowing. Golden marguerites and Shasta daisies, in particular, sow themselves with abandon, but unwanted seedlings are never a problem. You can smother them with mulch or scrape them off with a hoe easily.

Daisies can’t be neatly assigned to a single genus, but they do all belong to the same family. The archetypal form—a yellow centre ringed by a single row of petals—is shared by any number of species of the huge Compositae. Although they are in the same family, daisies can be as different as second cousins at a family reunion. White marguerite (Argyranthemum) can be sheared for a neat, controlled appearance that’s perfect in a formal garden bed or in a container.

At the other extreme is blue marguerite (Felicia amelloides), a sprawling subshrub with a casual air suitable for a naturalized garden of low-maintenance
plants.

THE THREE OPTIONS FOR HOW THEY GROW
Annuals
These are sown and flower all in one season and are replaced every year, either by buying fresh seed or collecting the seed. Hardy annuals can be sown outside from April to May, as they will survive being frosted, but half-hardy annuals have to be sown after the frosts. Varieties include: cosmos, marigold, Bidens, helichrysum, Ageratum.
Biennials
These take two years to complete their life cycle; germinating and growing the first year; flowering and setting seed the second year. Varieties include: Bellis perennis, Taraxacum officinale, Rudbeckia, Erigeron.
Perennials
These survive through several years, the foliage dying back over winter and growing back in spring. They include: Coreopsis, Anthemis, Ecinacea, Echinops and Leucanthemum vulgare (Ox-eye Daisy), seen on road-side verges. The clumps tend to become woody after a few years so need taking up and splitting into smaller plants. If left they lose their vigour and produce less flowers.

Daisies – a few facts
1. There are 20,000 species of plants which fall into the daisy family.
2. Gerbera daisies bloom in blazing red, bright orange, sunny yellow and shocking pink. Pastel colours include pale to medium pink, soft yellows, peach and light purple. The white is more of off-white than a bright white. Dark colours include purple, dark raspberry, maroon and bronze.
3. The largest daisy is Leucanthemum × superbum, the Shasta daisy, a commonly grown flowering herbaceous perennial plant with the classic daisy appearance of white petals (ray florets) around a yellow disc, similar to the oxeye daisy Leucanthemum vulgare Lam, but larger.
4. The flower name comes from the Old English word dægeseage, meaning ‘day’s eye’. … Daisy is also a nickname for Margaret, used because Marguerite, the French version of that name, is also a French name for the oxeye daisy. It came into popular use in the late Victorian era along with other flower names.