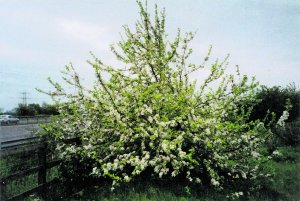 Retired horticulturist Geoffrey Rowson was driving down the M5 when he spotted some spectacular looking apples hanging from a small tree on the public side of the motorway fence.

It was an easy matter to pick a good sample of the fruit.

Says Geoffrey; “As the tree was growing in less than ideal conditions the fruit was on the small side but had an attractive golden yellow base colour with plenty of red striping – truly eye-catching.

“The flavour too was excellent: sweet with a honeyed backlash, aromatic and very juicy.

“From the habit of growth as well as the situation, it was obvious that the tree was a seedling rather than a deliberately pollenated variety. Had someone, several years ago, thrown an apple core from a passing car or had a pip from an earlier tree on an old orchard finally germinated after years lying dormant? We shall never know.”

Geoffrey thought the apple had promise. He sent samples to both the National Fruit Collection at Brogdale in Kent and to nurserymen Frank P.Matthews Ltd in Worcestershire who he knew well.

The response was favourable, especially from Dr Joan Morgan, a fruit expert who replied that it “could be a winner”.

It was as clear an indication possible that the effort to go ahead with its propagation and introduction as a new variety might be worthwhile.

But what to call this new potential Somerset variety?

“We tried various names but ‘Christmas Pippin’ was the final choice. The fruit certainly could be stored until Christmas or slightly later and the word ’pippin’ had a pleasant countryside ring as well as a suggestion of being a seedling.”

Young shoots for grafting were collected and sent to Frank Matthews for grafting into suitable rootstocks and in the early part of 2005 one of the first young trees was planted in Geoffrey’s garden near Taunton.

Early thinning of young fruitlets is needed to prevent over cropping which leads to undersized fruit.

“The general tree health appears to be good with little or no need for spraying. Picking is done in late September or early October and the fruit if it is in good condition will keep in a cool garage or shed until early the following year.”

Adds Geoffrey: “It is probably at its best for eating from mid November onwards but is also very good straight from the tree.”

The discovery of this new Somerset apple variety has gathered pace and thanks to the work of Nick Dunn from Frank Matthews who has raised the profile of the new variety, ‘Christmas Pippin’ is now widely available in garden centres throughout the county.

It is also currently under trial at the Royal Horticultural Society gardens at Wisley and has been sponsored for a grower trial at the National Fruit Collection in Kent.

Says Geoffrey; “Christmas Pippin’ really is living up to its initial promise as a excellent new Somerset variety for the amateur gardener to grow.”

So from a brief sighting on a motorway through to sponsored trials and now on the market for gardeners who are looking for something local when it comes to a new variety to grow, the story of the ‘Christmas Pippin’ is almost complete.

Its potential for large scale commercial growing has yet to be tested but it now has the chance to become a national favourite. 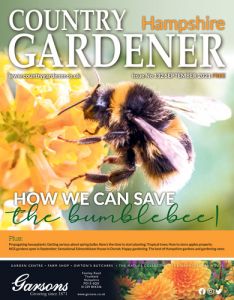