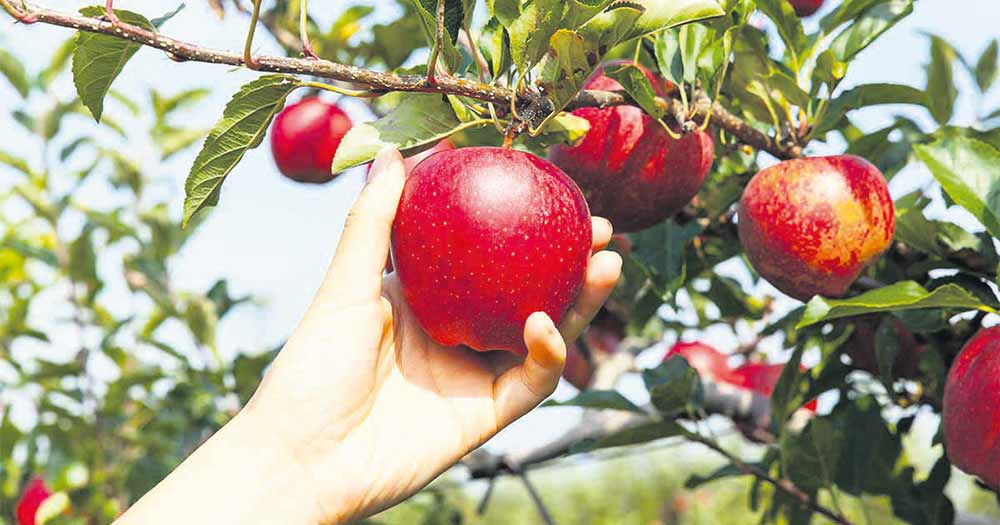 I seem to have a real problem with my apple trees which has been happening over the last two or three summers. The fruit is sparse and small and the trees are not growing well. Should I just give up on them?

No not just yet. There are some things to try and get some life and vigour back into the trees. Clear the grass and weeds around the base of the tree for at least one metre as these rob the tree of vital nutrients. Next the tree may need pruning, so take out any dead wood and thin out congested spur systems but don’t shorten the shoots. Make sure the centre of the tree is not overcrowded so prune to get light and air into the heart of the tree. Mulching with organic matter keeps the ground week free and moist. You can boost growth by feeding with a general fertiliser in early spring. If the tree is really dormant then it may need you to remove the blossom from the tree for a year or two to prevent short term fruiting and encourage longer-term vegetative growth.

I have been trying to grow seeds from a number of shrubs and plants in my garden but nothing has been happening. A neighbour said to me I needed to cold treat them and this has ended up with me not really understanding what I should be doing.

Cold treatment for seeds is necessary for plants or trees that require time in the ground over winter in order to germinate.

In nature, seeds require certain conditions in order to germinate. Seed stratification is the process whereby seed dormancy is broken in order to promote this germination. So some seeds require a warm and moist treatment, while others require a cool and wet treatment. Fuchsias, rudbeckias, lavender, verbena, hardy hibiscus are just some examples.

If you are starting cold treatment in the autumn, put the seeds in a pot of soil and dig the pot into the ground. The seeds will sprout in the spring. However, if you are starting treatment in the early season, you will want to soak seeds for 12 to 24 hours and put them in a plastic bag or sealable container with equal amounts for sand and peat. Seal the bag or container and place it in the refrigerator for 10 days. Label the container or bag so that you know which seeds they are. Check the seeds regularly to be sure that the planting medium is moist. Check the seeds after 10 days to see if they are sprouting, as some seeds may require a longer period of cold and wet conditions. Some seeds even require time in the freezer to break dormancy.

How late can I plant spring bulbs and what’s the effect of planting them late in the season? I ask because we are moving to a new garden at the end of November and I am wondering if it will be too late for next year?

The ideal time for getting spring bulbs in the ground is up to the end of October when hopefully the soil is still warm to allow the bulbs to make strong root systems before the real onset of winter so they give a good spring display. You can plant during late November and even December but remember that root development will be much more modest so the plant has to draw more of the resources stored in the bulb. This can result in non-flowering the following year as the bulb recovers. Where tulip fire disease has occurred planting later in November may help avoid infection. You may want to try planting late bulbs in containers where you can manage the progress and supply fertiliser to boost things a bit more.

My garden seems to be full this autumn of colourful fungi appearing mainly in dying and dead wood, some on old log piles. Are these dangerous to the rest of the garden and plants?

It may be what you are talking about is bracket fungi which includes a series of often colourful and exotic looking fungi. Relatively few fungi species are pathogenic (disease causing). Some such as honey fungus is the exception to the rule as this is virulent and attacks mainly trees and shrubs. It is easily identified and most gardeners would be able to identify it. Less well known are the groups of fungi living on dead or dying trees and shrubs. It is these species that break down wood to help release the nutrients locked up within and are a vital part of ecosystems. The vast majority are harmless or at worst are only weakly parasitic and are little cause for concern in the garden.

I planted a couple of fig trees in a south facing sheltered part of my garden. Do I need to do anything to protect them during the winter?

Fig trees need winter protection in areas where the temperature drops below 25°F. (-3°C.) There are two types of fig wintering that can be done. The first is fig tree winter protection for fig trees in the ground. The other is winter storage for trees in containers.

Planting a cold hardy fig will increase your chances of successfully wintering a fig tree. You can implement protection after the tree has lost all of its leaves in the autumn. Prune away any branches that are weak, diseased or crossing other branches. Next, tie the branches together to create a column. Place a thick layer of mulch on the ground over the roots. Then, wrap the fig tree in several layers of burlap. Keep in mind that with all layers (this and the others below), you will want to leave the top open to allow moisture and heat to escape. Remove the fig tree winter protection in the early spring when temperatures at night consistently stay above 20°F. (-6°C.) If your tree is in a container then its is much easier Once all of the leaves have fallen off the fig tree, place the tree in a cool, dry place. Often, people will place the tree in a garage, shed or even basement.

For the third year in a row my garlic crop has been badly affected by garlic rust. Can we still eat the garlic and why is this happening when I’ve tried hard to get rid of it?

Firstly, yes the garlic which is affected by rust is perfectly edible because it’s the bulb part you eat not the green leaves. In all honesty, there’s not much an organic gardener can do once garlic rust sets in. Rust spores live in soil so keeping a three-inch thick layer of mulch should help a bit. The only way to get rid of the fungus is by snipping off the leaves as soon as you see the rust start to appear. Throw the infected leaves in the waste bin (not the compost bin!), wash your hands and clothes, and disinfect your shears to prevent the fungus from spreading.

Even with the infected leaves removed, the garlic stalk should continue to photosynthesize and send energy down to the bulb.

As we’ve said garlic affected by rust is still edible (and tasty) and unless the infection was severe, you should get a decently sized bulb at harvest time. There’s no need to prematurely pull your crop unless the entire plant is brown and dead.