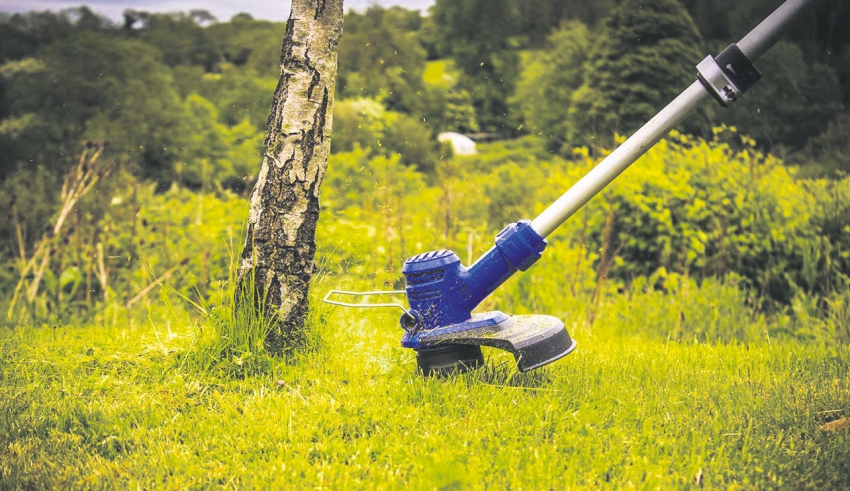 Spring isn’t too far away now and you might have noticed, the grass is starting to grow, and its time to get the lawn mower out again and ready for action

It’s also significantly the start of the strimming season where the grass starts to grow in places the mower can’t reach and there’s those awkward clumps of grass which it seems only the strimmer can reach and tidy up.

When I first started working as a professional gardener in the 1960’s, strimmers didn’t exist. Untidy corners and steep banks had to be cut by hand using shears or grass hooks (a lightweight sickle with a long sharp blade). I can remember many long hours spent cutting back overgrown areas that today could be cleared in minutes with a powerful strimmer. Often these areas would be left all summer when there was so much else to do, and then cut back in late autumn once growth had stopped.

Because of the intensive labour needed to maintain these overgrown parts of the garden, grass areas tended to have clearly defined edges, and lawns would be neatly edged where they adjoined buildings or walls.

The first strimmer was invented in the early 1970s by George Ballas of Houston, Texas who conceived the idea while watching the revolving action of the cleaning brushes in an automatic car wash. His first trimmer was made by attaching pieces of heavy-duty fishing line to a popcorn can. Ballas developed this into what he called the ‘weed eater’, since it chewed up the grass and weeds around trees.In the United States it is still known as a ‘weed-ship’ or ‘weed whacker’ which makes it pretty clear what its main purpose is.

Ballas went on to make a fortune from his invention, but whether it was a blessing or a curse is a matter of opinion.

In my view it is both.

I first started using a strimmer in the early 1980’s, and didn’t find it a pleasant experience. The early petrol strimmers were heavy, noisy and smelly, and there seemed to be something savage and brutal about flinging bits of chewed up weeds and grass all over the pace, and I couldn’t help thinking about those tiny creatures living in the undergrowth wondering what on earth was happening.

But gradually year by year I found myself using it more and more. Gardens I worked in imperceptibly changed as it was easier and quicker to strim than to keep maintaining all those tidy edges. There is no doubt they cut through more than just grass, as their name suggests.

Now I couldn’t manage without a powerful strimmer. I use it almost every day, not just for overgrowth but also for an instant tidy up of weedy patios or old brick paving (don’t try this at home unless you have a helmet, goggles and protective clothing! Even a tiny stone can be turned into a lethal projectile in a fraction of a second).

Yes I do see the occasional mashed-up little creature, though I try to strim a few inches above ground level to give them a chance to escape, and the noise is usually enough to send them scuttling off. And yes I do get covered in chewed up bits of grass and weeds, but I have to admit it is satisfying to see a weedy, overgrown corner or bank transformed in a matter of minutes.

As great as strimmers are, I can guarantee that you’d be very hard pressed if you had to mow any sizeable garden with a strimmer alone.

Even with one of those strong bladed models, just hovering the thing over your grass and weeds all day is enough to leave you severely fatigued and cramped up. A few hours in and you might just run out of elbow grease.

So it looks like strimmers are here to stay for the foreseeable future, and there are some encouraging developments, such as powerful rechargeable electric motors which promise a quieter and less smelly experience.

But a part of my gardening persona still yearns for those peaceful days spent quietly edging and hoeing and trimming, conveniently forgetting the hours of backbreaking labour cutting back an overgrown bank
with blunt shears!